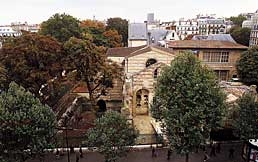 Map of the tepidarium in Lutecia's baths.

Theoretically, once clients had warmed up by exercising, they would go to the warm room, or tepidarium.

This function has not been identified with certainty for the Cluny baths, but it is thought that this room served as a tepidarium.

In reality, excavations have revealed that the room had two states. The first state was a hot room, as two large furnaces located beneath an adjoining room attest. One of these is still well preserved, with two small staircases leading to the boiler.

The hypocausts were designed to heat both the room-via a system of tubuli that ran beneath the floor, along the walls and over the vault-and the water supplied to the room. All four walls of this room had niches that are thought to have held individual baths, or rather receptacles fo labra.

These installations were later destroyed when the room was converted into a cold room.

A large central pool was installed, with a semicircular exedra at both the east and west end. This large pool was surrounded by a thick concrete seating area more than a metre deep that formed a passageway. The room was lit by arched windows, one of which-still standing-overlooked a courtyard.