As the Late Empire town was being redrawn, a new necropolis progressively replaced the one from the Early Empire It was located in the Faubourg Saint-Marcel where the Avenue des Gobelins now stands.

A necropolis for burials

This necropolis was used for burials only; many of the dead were buried in coffins or between wooden planks held in place by stones. The most characteristic graves consist of sarcophagi made from re-used stone blocks taken from Early Roman public buildings and funerary monuments. We should note the special case of a tomb carved out of a 3rd century milestone-it contains the first mention of the name Paris. 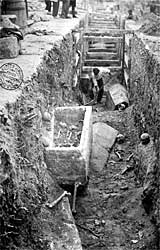 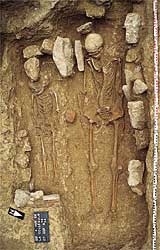 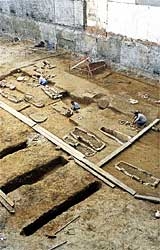 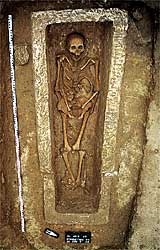 Excavation of tombs during the digging of a sewer line in 1898.

Graves made of planking or re-used sarcophagi in the Saint-Marcel necropolis.

Excavation of graves in sarcophagi in the Saint-Marcel necropolis in 1988.

Graves made of planking or re-used sarcophagi in the Saint-Marcel necropolis.

In the 4th century, only a few graves contained funerary deposits. Objects discovered include buckles, belt pendants and cruciform fibulae characteristic of the Roman public administration. Other objects meant to accompany the deceased include glassware and ceramics placed at the person's head or feet. Quite often, a coin for Charon-the ferryman who carried the dead across the river Styx-was placed on the eyelid, in the mouth, in the hand or sometimes in a small container next to the deceased.

The beginnings of Christianisation

From the 5th century until the Merovingian period, the necropolis spread and became organised, sometimes with alleyways between the graves. The grave type changed little and, with the exception of Charon's fee, funerary deposits became rare. In addition, the first signs of christianisation appeared in the 5th century.