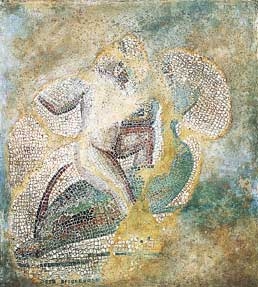 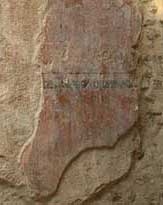 Fragment of a mosaic depicting a cupid sitting backwards on a dolphin, probably part of the flooring in the Cluny baths.

Painted plaster from a lower-level room.

Imprint of a wooden framework in the vault of one of the lower-level rooms.

A deliberate choice was made to construct the building on two levels, as it was built on the side of the Sainte-Geneviève hill. The result is that only the northern and central sections have a lower floor, as the hill's natural slope was probably dug out in order to make the ground level.

Technical rooms on the lower level

This level contained mostly technical areas. Some of these areas had barrel vaulting that is still well preserved; imprints of the planking used to build them can still be seen in the masonry. The walls are generally built of small masonry, and large masonry blocks were used to reinforce the doors. In some rooms, the presence of painted plaster seems to indicate that these rooms were not strictly used for technical purposes.

The bathing circuit on the upper level

The upper level contained the bathing circuit. The rooms and areas that had hydraulic installations were vaulted, while the covered palaestrae were given flat ceilings. We can only imagine the painting, stucco or sheets of marble-now completely gone-that covered the walls, but the preparatory plaster layer can still be seen here and there.

No flooring has been discovered in situ. No doubt the floors were decorated in opus sectile, or even mosaics, as the fragment of a cupid astride a dolphin suggests.

It is possible that the windows were glazed, even double-glazed. The existence of another floor that completed the bathing circuit is the subject of debate.