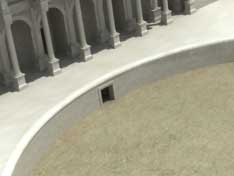 Small rooms (carceres) were found near the entryways. They were where animals were kept before they were released into the arena, or possibly "chapels" to which gladiators could withdraw prior to combat. Two of them flanked the main entrance to the south, but only one has been found next to the north entrance. A fourth room was found slightly off-center in relation to the stage, no doubt due to the position of the arena drains. The rooms were closed off by doors or gates.