The water brought by the aqueduct to Lutetia came from several springs. These were located in the hydrographic network in the present-day communities of Chilly-Mazarin, Morangis, Wissous and Paray-Vieille-Poste, all of them in the department of Essonne. These springs were directed into three channels that emptied into a rectangular reservoir that fed the Lutetia aqueduct. The aqueduct's flow rate, estimated at 2,000 cubit meters a day, does not allow us to estimate the city's population. This is because the use of the water supply for recreational purposes outstripped more utilitarian requirements.

A path that followed the contours of the land

From Wissous to the rue Thomire, where it entered Paris-16 kilometres as the crow flies-the aqueduct traced a 26-kilometre path through the present-day towns of Fresnes, Hay-les-Roses, Arcueil and Gentilly. The additional length is due to the fact that structures like aqueducts had to be built with an eye on costs. Thus, the engineers followed the contours of the land, avoiding abrupt changes in the terrain. The one unavoidable obstacle was the Bièvre Valley, which required the construction of a bridge at Arcueil. 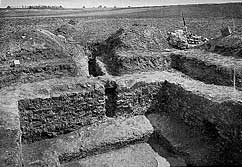 The aqueduct in the city

A number of sections of the aqueduct have been discovered in various parts of Paris, allowing us to trace its path as it arrived in the ancient city. However, we cannot precisely determine how water was supplied to the community's three baths, as well as the fountains and other water structures that served the Roman city.

Another large aqueduct of completely different design was discovered beneath the Curie Institute. It could a deviation from the Arcueil aqueduct, or a system that specifically supplied water to the Collège de France baths.