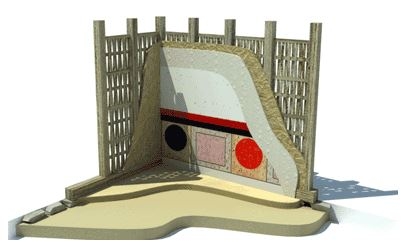 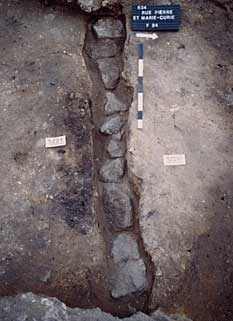 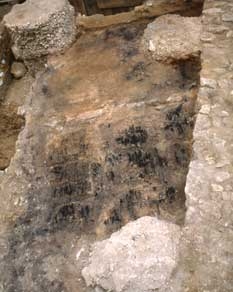 Reconstruction of a clay wall with a painted decor.

The Roman city's first houses were built during the Augustan period.

Usually built of wood and clay, they were of a standard design. This indigenous type of construction also presents similarities with the architecture of Roman military camps.

The walls rested on wall plates laid on stone plinths that were more or less aligned. On this base, a system of notches held vertical stanchions in place, to which were fasted horizontal laths. A vertical system of wattling composed of supple rods was then attached to this substructure, and the entire wall was given a coat of clay.

Despite the use of seemingly rudimentary materials, this type of construction was actually quite sophisticated. The walls could be given very smooth coats of plaster and carefully painted murals. In addition, the rich and abundant furnishings found during excavations are clear indications of the lifestyle of the residents of certain insulae in the city centre.

The thinness of the walls indicates that these houses did not rise above ground level. Roofs were also made of perishable materials-thatch or wooden planks-since no roof tiles have been discovered in destruction layers. As for floors, they consisted of beaten earth or hard-packed yellow clay. 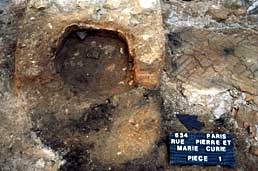 Cellar made from small stones with two in situ pottery pieces and the carbonised wood of the trap door.

View of a domestic oven missing its circular top.

Houses built during the Augustan period were small-close in size to La Tène-era houses-and set in the middle of large, open, rectangular spaces. They consisted of one or two rooms. Later, they grew larger and other rooms were added. Every house had its own clay oven or cooking stone as well as a shallow cellar, where perishable food items were kept. Evidence for this is seen in the discovery of rows of ceramics set in the ground, crushed where they stood when the house burned. These small underground pantries, accessible via a ladder, were closed off by a two-ringed trap door. Waste areas and wells were located in courtyards next to the dwellings. This gave residents access to water-it seems that water supply and drainage systems arrived later.