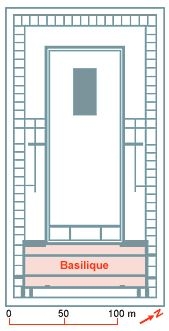 The basilica was an essential part of any forum. Generally, it served a number of different functions, as a courtroom, trading centre or covered market. It offered a sheltered area where business could be conducted, or simply a place to walk and meet one's fellow citizens. At Lutetia, the basilica was a rectangular building composed of a nave flanked by thick longitudinal walls. These walls probably supported a colonnade, as inferred from the discovery of a column base and several column shafts. This space was no doubt bordered by aisles that perhaps formed an ambulatory. The existence of a curia-the place where the local senate would convene-is the subject of some controversy. It is based on Theodore Vacquer's discovery of thick walls in the middle of the long east side. One of these walls was on a diagonal, suggesting an exedra in the shape of a hexagonal apse. It is tempting to think of this as an element of the curia, but if so, it would have been much smaller.