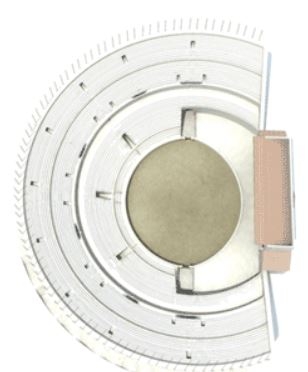 The arena was used for all sorts of gladiatorial or animal combats. Located outside the city, the amphitheatre could accommodate up to 17,000 spectators from all over the Parisii territory.
© A.-B. Pimpaud.

Map of the arena.

The perimeter of the arena can be calculated based on matching up the two arcs to the right of the main entryways. The arena was surrounded by a podium wall-no longer visible today, but whose foundations were excavated. It was very likely constructed in large masonry and perhaps topped by a balteus, a security walkway.
The arena measured 52,36 X 45,82 meters.

Between the podium wall and the cavea there was a service passageway which perhaps gae access to the cavea.

The ground of the arena was made of levelled earth, no doubt covered with sand. Rainwater was evacuated by a drain-traces of which have been found-that ran beneath the stage.