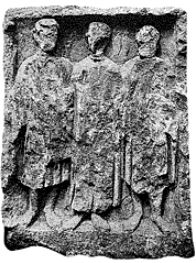 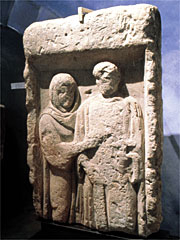 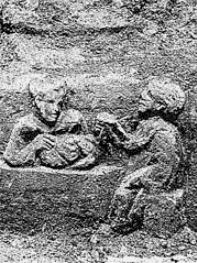 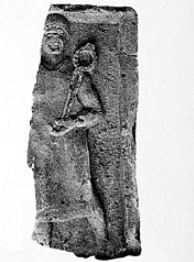 Funerary stele depicting fishmongers, who can be identified by a ring in the background to which are attached two fish.

Funerary stele of a blacksmith, identifiable by his large apron and tongs.

Funerary stele depicting a market scene. Photo taken in 1910 at the time of excavation.

Funerary stele of a blacksmith, identifiable by his large apron and tongs.

Ships and the control of the river

Founded at the meeting point of river and road, the town owed its prosperity to trade and the transport of merchandise. In such a setting, the town's boatmen played an important role, and were among the town's leading citizens. Evidence of their evergetism may be seen in the construction of the sumptuous baths as well as in the sculpted decoration of its frigidarium. Their allegiance to Rome is clear from the famous pilar that they dedicated to Tiberius.

Shipping activities grew beyond the regional level, requiring large-scale installations (a port, warehouses, a shipyard, etc.). Unfortunately, we have found no trace of these to date.

This major activity created a series of associated trades, including land transportation and occupations that depended on it. The memory of these trades,   in the form of inscriptions or sculpted images, is preserved on steles. On one stele, we see people engaged in packing a large woven basket that is being placed on a cart while two tradesmen appear to be negotiating. More modest professions are also depicted: fishmongers, blacksmiths, even a tanner. One inscription even mentions a tailor.

The best businesses were found in the shops around the forum. Other particularly prized locations for shops were found along the main streets, which were wide and practical for travellers. The same is true of the Cluny baths where over a dozen shops sold products probably in connection with the baths, such as unguents and perfumes. Smaller shops on side streets dealt in local products or sold food.