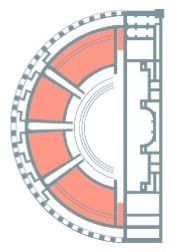 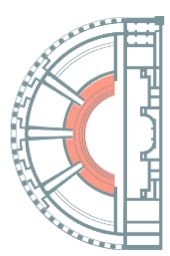 To avoid having to build large foundations, the architects took advantage of the terrain to rest the rows of seats on the slope of the hill, reinforced with added landfill. This decision also explains the thinness of the cavea outside wall. Two other circular walls probably correspond to walkways that divided the different areas of the cavea.

Thus, Lutetia's theatre probably included an upper maenianum and a lower maenianum.   No trace has been found of the lower lower maenianum. Théodore Vacquer suggested a reconstruction based on the difference in level between the floor of the vomitoria-which corresponds to the top of the maenianum-and that of the orchestra stalls. This difference corresponds to the height of three rows of seats that, given their proximity to the stage, were reserved for important persons.