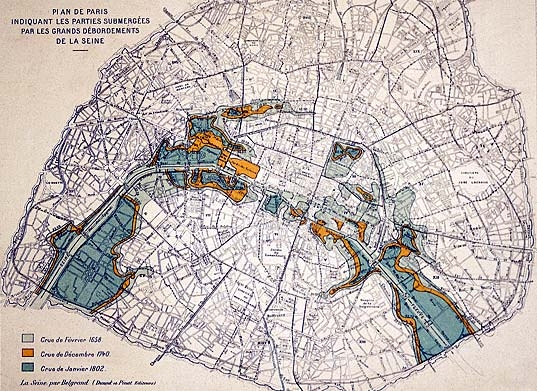 Map of the great floods of the Seine in modern times, drawn up in 1872 by Belgrand. The famous flood of 1910 followed the same course. This map suggests how Paris may have looked prior to urbanisation. In particular, the fossil trace of the river's northern branch can be seen.

Location of the Seine

We should not imagine that the Seine in Antiquity looked like its current, highly channelled state. The map of the great floods of the past shows the original complexity of the river and its tributaries that formed a network of several successive channels.

Since the mid-Neolithic, the path of the main riverbed was probably the one we know today. We have established that it flowed more to the north at the level of Bercy and more to the south near Grenelle, accenting the gentle curve that we can observe today.

The paths of the secondary riverbeds have completely disappeared under urbanisation, even if their topography can still be faintly detected.

This is particularly true of the branch that was covered over by the Boulevard Saint-Germain - we know that it was active during the Gallo-Roman period.

On the right bank, the northern branch is still perceptible today, as we can see from the trace of the great flood of 1910: the path of the ancient branch roughly corresponds to the big right-bank boulevards. Its size leads one to think that, for a time, it was the river's principal pathway.

In contrast to today's built-up, cemented borders, we must picture the banks of the Seine combined with floodable grasslands and marshy areas, as is the case at the mouth of the Bièvre, or between the Seine and the slopes of the Sainte-Geneviève hill. The first quays only appeared with urbanisation activities.