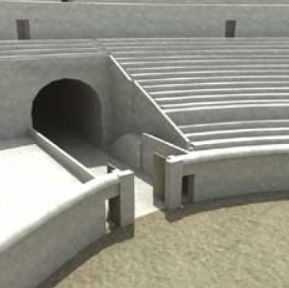 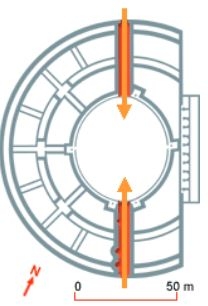 3D reconstitution of the main entrances of the amphitheatre.

Map of the main entrances.

Two large entryways, located at either end of the building's main axis, gave access to the arena. Their vaulted passageways, nearly 40 meters in length, led down to the arena itself. Archaeological excavations have revealed that these passageways ended in a triple doorway.

A central four-paneled door -as the placement of hinges seems to indicate-was flanked by two small lateral doors, which probably were incorporated into the elevation of the podium.

The passageway to the south contained two alcoves on its western side; these contained the earth that acted as a substrate for the upper part of the seating area. Here the paving contains several holes, one of which was probably used to anchor a movable partition. Finally, near the entrance to the arena, a small staircase led to the honorary seating area.