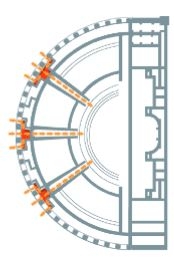 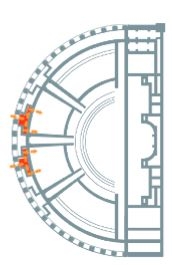 Map of the three acces reserved for dignitary.

Map of the two acces reserved for the municipal elite.

Excavation of the outer gallery has revealed foundations of stairways that led to the walkways within the cavea. hese stairways were built to control how the audience entered the two main maeniana-a reflection of the social distinctions that existed in the Roman Empire.

Certain spectators-no doubt important persons-entered through three openings in the exterior gallery and followed a vomitorium that led them directly to the better seats, located in the lower maenianum. The others entered by single opening and climbed two stairways to the upper maenianum.

At either end of the semicircular cavea, parallel to the pulpitum, there were two side entrances, or aditi maximi, reserved for the town's elite. These two corridors led directly to the orchestra; they formed a special access that was separated from the outer gallery by a thick wall. A tribune for very important spectators was probably built on top of both of them.