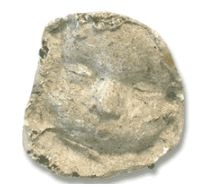 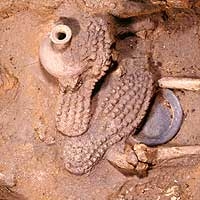 Death mask of an infant accidentally created by the mortar used to seal its tomb.

Partial view of a tomb with the remains of a pair of boots with studded soles and funerary objects, consisting of a plate and a pitcher.

The dead were buried in one of four ways: directly in the earth, directly but with a stretcher beneath the body, in a wooden casket or, in a few cases, in a stone enclosure. The use of a sarcophagus was an exception-only three have been found, including two infant burials. One interesting tomb contained an infant, interred with a glass baby bottle, whose death mask was made from the mortar used to seal the tomb. As the discovery of traces of footwear with studded soles attests, the dead were buried with their clothing.