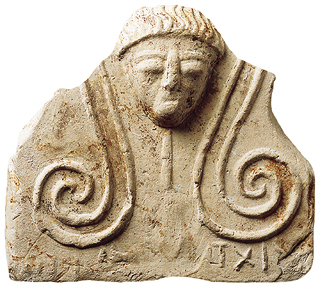 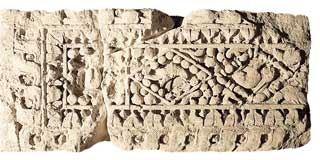 Blocks from an architrave that was probably originally in the forum.

Naturally, the parts of the building we know the most about are its foundations. At their base, they consisted of large stones set in a strong mortar. Higher up, small, meticulously dressed stone blocks were employed. The measurements taken by Théodore Vacquer in the cryptoporticus gives us an idea of the walls. Like other Lutetian monuments, these were in opus vittatum mixtum. Large masonry blocks were also used, but these were removed when the building was used as a stone-quarry in the Late Empire period-as scarring on the remaining stonework shows.

Very few of the forum's decorative elements have survived. With the exception of a few column parts and several fragments of opus sectile found in situ, most of the architectural parts that we associate with the forum were discovered in landfill or reused in other constructions. This is the case with a series of sculpted blocks that, when laid end-to-end, form a 3.3 metre long section of an architrave. Another sculpted block found in the same place depicts a seated female figure, possible a muse. Its size and the care that was taken in making it suggest that it was part of Lutetia's principal public monument.

Other elements have allowed us to trace the image of the forum a little better. These include the discovery of an altar, bearing no inscription, which was found in the cryptoporticus-probably not its original home-and several antefixes that were found near the forum. These have provided information about how the roof was decorated.