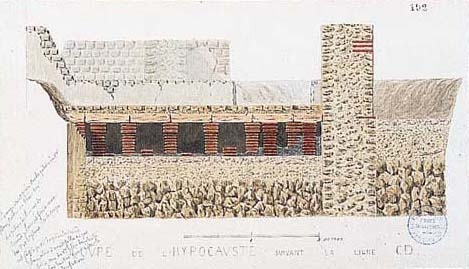 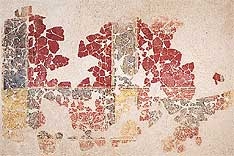 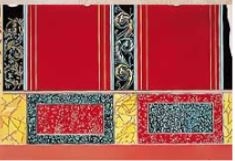 Reconstruction and restoration of a painted plaster wall-an attempt has been made to reconstitute the decoration. Late 2nd-early 3rd century.

Reconstruction and restoration of a painted plaster wall-an attempt has been made to reconstitute the decoration. Late 2nd-early 3rd century.

At the end of the 1st century CE, the fabric of the city became denser. As unbuilt spaces were divided into lots and Lutetia's first public monuments appeared, timber-framed houses were progressively replaced by ones made of stone. Nevertheless, the two types of houses continued to coexist. This architectural shift from earth to stone can be characterised in several ways. Stone house construction respected at least two factors imposed by previous constructions. First, they kept the general orientation of the house, although they tended towards a more systematic use of the north-south axis. Second, they respected the limits of the parcel of land.

As is common in Roman construction, the walls were made of a double layer of small limestone blocks, held together by a lime mortar and completed with a filler of small stones. These walls were systematically dismantled and the stones reused. However, the existence of walls made entirely of masonry has been shown by the discovery of several intact sections and fragments of wall paintings in which the imprint of stones can be seen. The thickness of the walls suggests that these houses could have had an additional level.

These more permanent houses had features that reflect urban prosperity: the appearance of cement floors, large underground rooms, stone stairways and drainage systems. Some owners built hypocausts and private baths, and continued to decorate their homes with murals, numerous traces of which have been found. 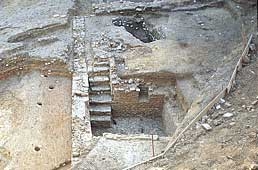 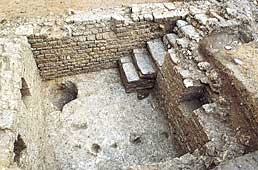 Small below-ground room in a high Roman Empire house with staircase, niches and a vent connected to a courtyard.

Small below-ground room in a high Roman Empire house with staircase, niches and a vent connected to a courtyard.

Several recent excavations of outlying areas have allowed archaeologists to establish the layout of a 2nd and 3rd century insula. Habitation areas were organised around a common space where various domestic activities-particularly cooking and crafts-took place. Discoveries in these spaces include wheel ruts, traces of meat cutting and millstones.

The facades of the houses around this courtyard generally had covered walkways supported by posts or pillars and bordered by a rudimentary drainage system. The same system was used for the parts of the houses facing the street, where the covered walkway sometimes took the place of the sidewalk.

In the centre of the city, it was a different story: any unbuilt areas disappeared beneath housing construction.

In general, masonry houses were organised differently from their predecessors. Larger houses, the use of building stones and the probably existence of an upper story transformed the floor plan and room distribution. Rooms were more evenly divided and were aligned with one another. Houses were organized in rows of rooms of a set width between 4.5 and 6.5 metres. Small rooms disappeared, and both hearths and domestic ovens are absent from the main rooms. This might indicate on one hand a change in the way that houses were heated, and on the other that domestic activity was assigned to certain rooms of the house.