Like most cities in Northern Gaul, the Christianisation of Lutetia did not really begin until the 3rd century. However, there are very few material traces. We must rely on Christian tradition for the story of Saint Denis and his two acolytes, Rusticus and Eleutherius-the sources of this evangelisation-even though we know absolutely nothing about the two followers.

Contrary to legend-which holds that the first Christians met in the Late Roman necropolis-the city's first church was located in a private house on the Île de la Cité, not far from the location of the present cathedral.

During the archaeological excavation of the square in front of Notre-Dame, the discovery of a cup base decorated with a chi-rho furnished archaeologists with one of the rare witnesses to this period.

Several 5th century Christian steles discovered in the Late Roman necropolis attest to the city's steady Christianisation. The most remarkable of these include one with a dedication by a man called Vitalis to his wife Barbara, and that of Theodotis. 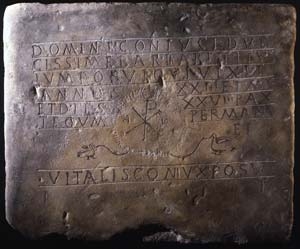 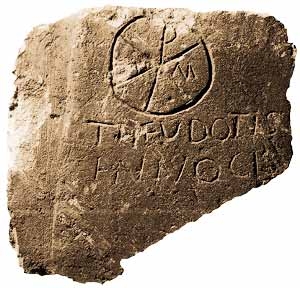 Epitaph to Barbara: "For my most gentle lady Barbara I have made this tomb. She lived twenty-three years, twenty-eight days. May peace be with you! Vitalis your husband had [this epigraph] engraved".