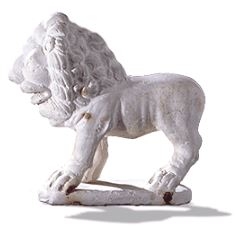 Balsamarium in the shape of a young man's head. Bronze. Early Roman Empire.

Funerary objects were normally placed in tombs. These consisted of objects placed at the head or feet of the deceased, generally vases, including terra sigillata, fineware and common ware of all types, but rarely glass vessels. Sometimes tombs contain small statues or objects made from bone. Among the most remarkable objects found are a balsamarium in the shape of a young man's head, and small statues made of white clay from the Allier River. One of the statues is of a mother goddess, another represents a duck, and there is one of a small lion. When the dead were buried in caskets, objects were placed outside. We know that offerings of food were also made, as spoons and animal bones have been found among the funerary objects.

A small number of tombs contain the ritual coin offered to Charon, the ferryman who takes the dead across the River Styx. A single coin (rarely more) was placed in the mouth, in the hand or among the funerary objects in the case of a burial. This was also done when the deceased was cremated.