The basic unit of measurement

The discovery of ancient roads, the reconstruction of the boundaries of the main Early Roman monuments and the path of certain medieval roads have all contributed to the establishment of a theoretical, strictly orthogonal town grid. The basic unit of this grid has been found everywhere in the central section of Lutetia.

This unit corresponds to exactly 300 Roman feet, with occasional subdivisions of 150 feet. The choice of this unit proves that the urban plan of Lutetia was an abstract procedure, and that the planners did not have to consider previous settlements-or chose not to. This grid system seems also to have been partially used on the right bank, even in areas that were not completely urbanised. Thus, between the cardo maximus (rue Saint-Martin) and the cardo that is the present Rue Saint-Denis it is exactly 600 Roman feet.

Laying out the grid

To implement this grid system, the surveyors probably established a straight line that would become the principal axis of the settlement, the cardo maximus. We can imagine the initial location of the groma would have been the highest point on this axis, one that offered a very clear view of the island and the right bank. This "zero point" was probably located at the southwest corner of the forum, which corresponds to nos. 172 and 174 of Rue Saint-Jacques: the highest point on the Saint-Geneviève hill. 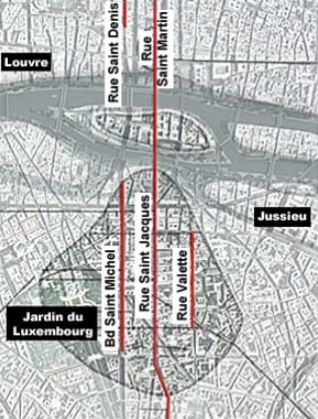 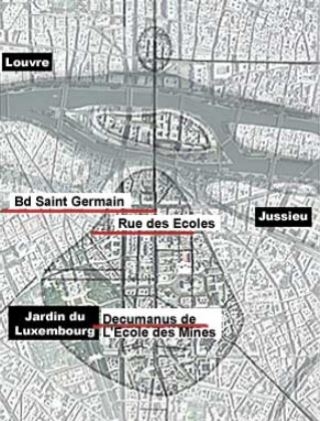 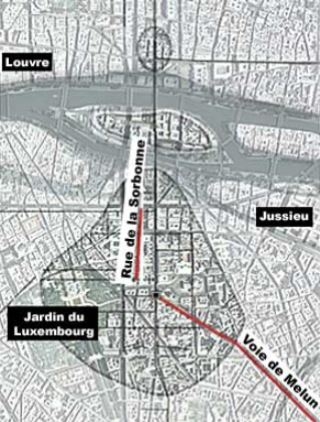 The decumani have been almost completely erased from the present-day topography of Paris. Some of them did not exactly follow the lines of the initial grid, which shows that the Roman town planners adapted the layout of the city when necessary. Thus, the l'Ecole des Mines decumanus is roughly ten metres south of where it should be. To the north, the distance between the decumanus that is thought to have run alongside the Cluny baths, parallel to the Boulevard Saint-Germain and the decumanus of the Rue des Ecoles is not 300 but 400 Roman feet.

Adaptations of the grid system

There are also streets that run diagonal to the grid system, but that are nevertheless part of the urban plan. For example, the road formed by the Rue de la Sorbonne and the Rue Victor-Cousin ran along the eastern side of the Cluny baths-which was 300 Roman feet long-and ended at the entrance to the forum. However, the entrance was in relation to the long side of the monument, and the road was adapted to this.

Another example of this is the via transversa that started from the city's zero point and joined the Melun road. The line of this road is a perfect diagonal of a rectangle measuring two and a half units by three units. This road-most likely an important one, since it linked the capital of the Parisii with Italy via Melun and Lyon-had thus been anticipated from the beginning of the construction of the Roman city.

Secondary orientations have been found outside the town, probably corresponding to roads leading to Lutetia in order to have access to the bridge. It is difficult to know whether, like the Melun road, they were part of the original urban plan. It is likely that a section of the rue de Vaugirard was a Roman road, perhaps one that ran along the edge of town and was the end-point for several decumani.

Another significant diverging road can be seen in the Rue Saint-Jacques cardo which deviates before returning to its original path. Several roads and houses found nearby were built around this deviation-this is probably because it was a link between the new axis laid out by Lutetia's founders and an older, apparently protohistoric road that connected Lutetia to the Gallic oppidum of Genabum (current city of Orléans).

We can see that this deviation is located right at the edge of Lutetia (after this point the road becomes a highway). However, it is possible that the deviation represents an adaptation of the road to an aspect of the terrain. This type of geographical adaptation can be used to explain other deviations from the grid system. This is the case with the Île de la Cité and the small district on the Saint-Séverin hillock. Their small surface areas made it difficult to incorporate them into the grid plan, and their location in flooding zones meant that they could not be built up systematically. The most we can say is that the cardo maximus probably connected with a series of small perpendicular streets that led to housing areas.