The toponym "Arennes" is found in texts from the 12th century onward-indicating that the existence of such a monument as well as its location near Saint-Victor were always known. It was only in 1867-1868, however, during the construction of the Rue Monge, that Th. Vacquer-who knew that such a discovery was possible-began to excavate the amphitheatre.

In 1870, construction work on a warehouse for the Compagnie des Omnibus (a transportation firm) revealed a large portion of the edifice. A battle was waged to protect the remains, but three months later, the Compagnie was granted permission to tear them down. 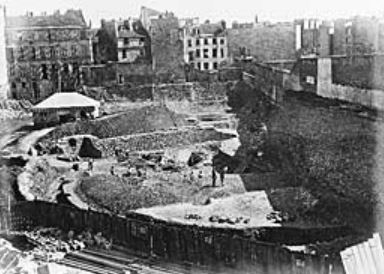 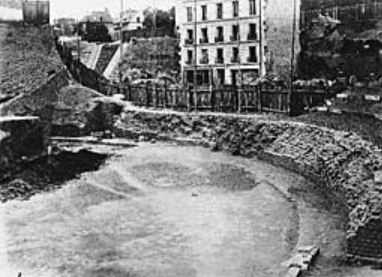 The arena during excavation in 1870.

The arena during excavation in 1870.

Other archaeological excavations were carried out on neighbouring plots of land in 1872 and 1883; Theodore Vacquer was excluded from these because of his difficult personality.

Finally, following the intervention of a number of important people, including Victor Hugo, the city of Paris acquired the land and attempted to preserve what remained of the amphitheatre.

In 1915-1916, the architect Jules Formigé carried out a "restoration"-tantamount to a reconstruction-based largely on guesswork. The remains were converted into a public park, accessible today by a door at 49 Rue Monge, and by the Rue de Navarre.