There is some uncertainty about the type and date of the first Roman settlements in Lutetia after the conquest and destruction of the Parisii oppidum.

The excavation of archaeological material on the Sainte-Geneviève hill from the second half of the 1st century CE (Gallic and late Republican Roman coins, and imported Italian ceramics) could be evidence that the site was reoccupied fairly quickly after the conquest. 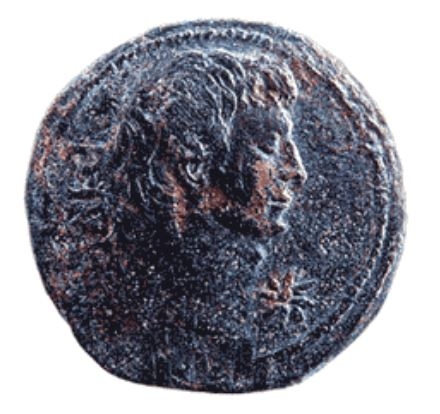 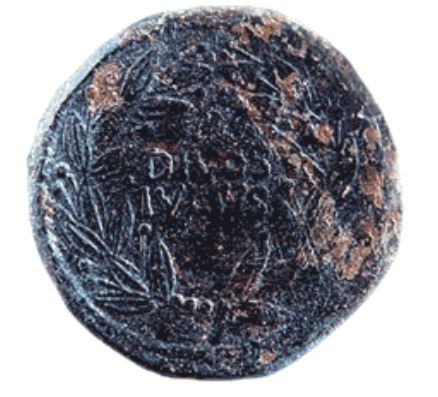 Rare example, in Northern Gaul, of an official Ocatavian coin minted in Campania in 38 BCE with the inscription DIVOS IVLIUS (Divine Julius).

Rare example, in Northern Gaul, of an official Ocatavian coin minted in Campania in 38 BCE with the inscription DIVOS IVLIUS (Divine Julius).

Second half of the 1st century BCE.

In addition, the discovery of several metallic fragments, possibly from Roman military equipment, and the remains of cooking practices-indicators of a certain degree of Romanisation-could lead one to think that the site was initially occupied by auxiliary troops of the Roman army. The reason for this military occupation would have been to keep control of the Seine and to keep an eye on a tribe that was capable of disrupting this strategic junction.

Given this hypothesis, the discovery of a man's grave containing a Gallic sword and fragments of Italian wine amphorae has even greater meaning.

Occupations that are difficult to interpret

Structures prior to the augustan urban construction program are not well known, as the terrain was covered over with landfill prior to construction. Starting in 30-25 BCE, the existence of an initial town plan has been uncovered-a few, faint traces of ditches, post-holes and sill plates.

An urbanisation plan and the division of the land into parcels were only undertaken at the very beginning of the 1st century CE, as shown by ditches found in various places. The boundaries of land parcels and the orientation of roads laid out when the city was founded were often preserved throughout Antiquity.

A Gallic auxiliary of the Roman army

The 1974 discovery, in an annex of the Senate, of a human skeleton in a well accompanied by numerous objects was the most important evidence of the presence of human habitation between the end of Gallic independence and the foundation of the Roman city. Located in a peripheral district of the Roman town, this well was dug and filled in prior to Roman urbanisation. 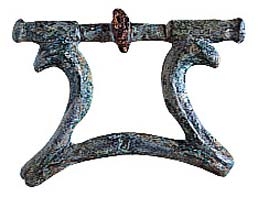 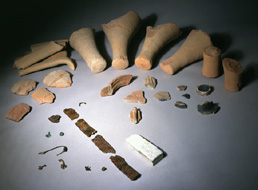 Reconstruction of the « Man of the Senate » found at the bottom of a well in an annex of the French Senate. It may have been a Gallic auxiliary cavalryman in the service of Rome.

Belt buckle of« the Man of the Senate ».

Overview of the objects and some of the amphorae.

A variety of objects

The skeleton of a 35 year-old man was accompanied by objects that allow us to date and identify him with precision. He was dressed in a garment held together by two Gallic fibulae made of iron, and wore a belt whose buckle, of Roman origin, was found. He was equipped with a Gallic sword sheath and a whetstone; a nail found nearby may have come from a Roman military sandal. The remaining objects include a number of fragments of Italian wine amphorae, a few pieces of local pottery, a Gallic coin with the inscription VENEXTOS and many animal bones.

This grave, which dates to between 60 and 30 BCE, may be that of an auxiliary cavalryman from the Gallic aristocracy in the service of the Roman army at the end of the Republic. This would explain the combination of elements of both Gallic and Roman military equipment. The shape of the grave-a well in which the deceased was placed or dropped along with weapons and clothing-is surprising; we cannot exclude the theory that this was a human sacrifice or an execution.