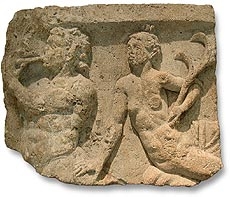 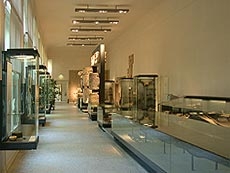 Bas-relief featuring a Triton, blowing a horn or shell, and a Nereid. This was probably part of a mausoleum. Early Roman Empire. Reused in the decumanus to the south of the basilica at the Marché aux Fleurs, 1982.

The main gallery of the orangerie.

Since 1880, the hôtel Carnavalet has been home to a museum of the history of Paris.

The archaeological galleries were created by Theodore Vacquer, and were designed to display objects from past and present-day archaeological excavations.

The archaeological collections currently on display in the main gallery of the museum's orangerie trace the very early history of France's capital. The first section presents prehistoric discoveries, particularly the two Neolithic dugout canoes from the excavations at Bercy, and vestiges from the Bronze Age. The Gallic period is represented by several examples of gold coins attributed to the Parisii.

The Gallo-Roman section presents, among other things, large sculpted architectural blocks thought to come from the forum, and noteworthy painted wall panels from Gallo-Roman houses. Scale models show the extent of the ancient city, and a series of display cases present a number of objects from the daily life of the very first Parisians.