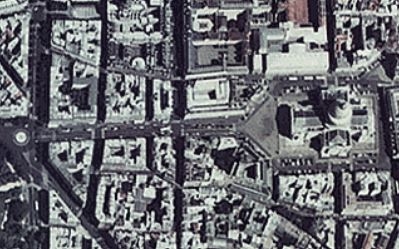 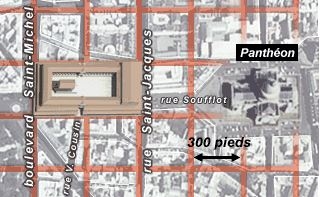 Distribution of space and hypothetical reconstruction of the forum's layout based on the urban planning unit of 300 Roman feet.

Reconstruction of the forum superimposed on a current view of Paris.

The forum fit perfectly within the urban grid layout. It was rectangular; the smaller side corresponded exactly to one unit of the basic grid (i.e. 300 Roman feet), while the larger side was equivalent to two units (600 Roman feet). The outside walkway was part of the roadway, and should not be taken into account when calculating the forum's size.

The forum was built on the top and side of the Sainte-Geneviève hill. This was deliberately done in order to use the sloping ground to construct the building on several levels-starting with the cryptoporticus, then the square and finally the basilica and the upper portico. To achieve this, the builders had to plan the layout and elevation of every part of the building so that they would fit together perfectly.