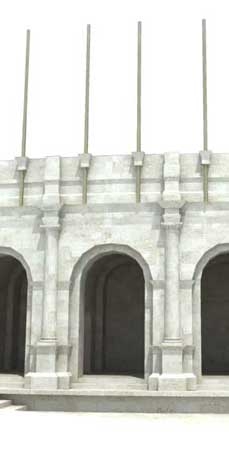 The existence of a velum for protecting the spectactors has been confirmed by the discovery of architectural blocks with holes in them. These held the poles on which the canvas was hung.

Although the facade had completely disappeared-its stones having been dismantled and reused-it was reconstructed by Jules Formigé based on architectural elements found in situ.

Two drums of half-columns set into piers gave order and dimension to the arches that separated them. There were 41 arches between the engaged columns. Based on these proportions, the vertical proportions were calculated. A discovered cornice has been interpreted as the moulding at the top of the column bases.

This ensemble was topped by an attic to which corbels for the velum were attached. These corbels can be identified by the holes in them that held the posts. Some were found during the demolition of the monument or reused in the wall on the Île de la Cité. 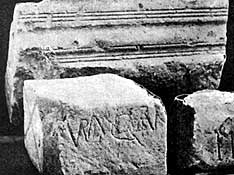 Cornice moulding at the top of a column base.

Stones used in the corbel.