The Lutetia amphitheatre was a "multi-use" structure with a classical stage. It could be used for a variety of performances such as mimes, pantomimes or sung plays, in which the actors moved about on stage

The stage was roughly 40 meters long with a wall at each end; both walls formed an angle that marked the junction with the cavea. The front part of the stage was occupied by the proscaenium, and in the back there was a richly decorated scaenae frons, or stage wall. Substantial portions of this wall have been discovered. It was comprised of five rectangular alcoves that alternated with four semi-circular alcoves. The alcove interiors were painted and probably stuccoed. Some of them, according to the classical norms of ancient theatres, would have served as the three required stage entrances. The rectangular alcove in the centre was the porta regia (main door), and the two rectangular alcoves at each end of the stage would have been the valvae hospitalia (folding side doors).

The many sculptural fragments found nearby no doubt come from the statues that decorated the alcoves. A life-sized woman's head crowned with oak leaves is in the collection of the Carnavalet Museum. The back of the head was left unsculpted, and it is very likely that it was placed against a wall at the rear of an alcove. The flanking sides of the scaenae frons were decorated with engaged columns.

The presence of a roof-which was necessary to protect the stage and to direct the actors' and singers' voices out towards the audience-was confirmed by the discovery of a large number of roof tiles in the vicinity. 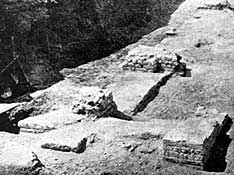 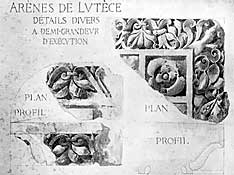 Condition of the stage during its excavation in 1883.

Sculpted fragments from the stage.