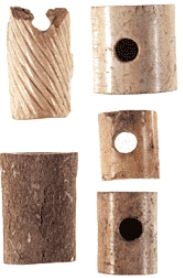 The diet of the population of Lutetia consisted largely of grains, usually eaten in the form of gruel. Recent excavations have turned up carbonized remains of wheat and barley, as well as the silos and granaries for storing them.

Recent studies have refined our knowledge of meat consumption, which seems also to have been an important part of the inhabitants' diet.

We know that wild species such as deer, boar and roebuck-and less frequently crane, beaver and rabbit-were hunted. However, domesticated animals were the major source of meat. Beef, pork and lamb were the most common eaten types of meat, followed by chicken, duck and goose. Dogs and horses were also eaten.

Studies of bone deposits have shown that butchering methods were identical to those of the Gauls; Roman techniques came into use quite late, around the 3rd century. There was also a close link between producer and consumer-it is possible that small groups of animals were kept inside housing units, even ones close to the city centre.

We also know that live animals were delivered to households; slaughter, butchering and consumption were carried out on the spot, inside the house. The same is true for the treatment of animal materials (bones, hide and tendons), traces of which have also been found.