The monumental complex in the Romanesque period (12th century)

Abbot Suger extended the Carolingian basilica to the west by adding the current west front the outline of which maintains the overall aspect of the original, with the exception of the tower of the north façade, which was taken down in 1847. The interior structure of this front includes three upper-story chapels that originally also had windows facing east. With its three portals, the west front reasserts its role as the primary access to the church. To connect the west front to the church, four connecting bays - discovered during archaeological excavations - reproduce the exact structure of the basilica's nave. The church was also extended to the east by the current chevet, whose first level encompasses the Carolingian-era crypts, and reveals the bases of two towers that were intended to flank the sanctuary, but which remained unbuilt. The second level of the chevet corresponds to the ambulatory that opens onto five radiating chapels. The third level has disappeared. Sumner Crosby's reconstruction gives it the shape of a choir with diagonal rib vaulting, lit by a row of high windows. This proposal implies the existence, on the outside, of a buttressing system, supported by sizeable piers located between the chapels. A third construction campaign aimed at flanking the Carolingian nave with double side-aisles-a start was made on the construction of new exterior walls, but this was left unfinished.

When it comes to the medieval monastery, we have sufficient sources-including Robert de Cotte's survey drawings, a number of images from before the eighteenth century, as well as recent archaeological observations carried out at the site-to offer a reconstruction of the monastery's buildings, in particular the Romanesque cloister and the guest house attributed to the same period. In all likelihood, the four galleries of the cloister abutted the unfinished side aisle of the basilica to the north, and an earlier state of the sleeping quarters and refectory to the east and the south. To the west, they bordered the new wing of the guest house, which appear to have been built with a high gallery lit by a series of arcades atop the sloping roof of the cloister. 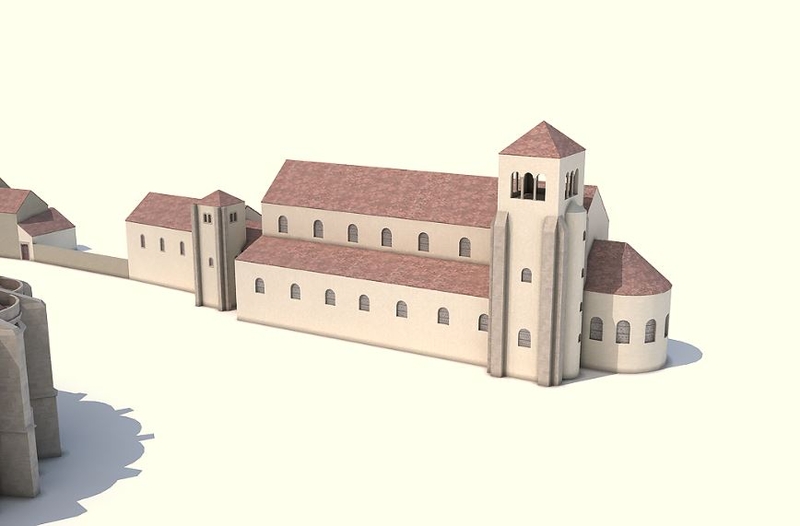 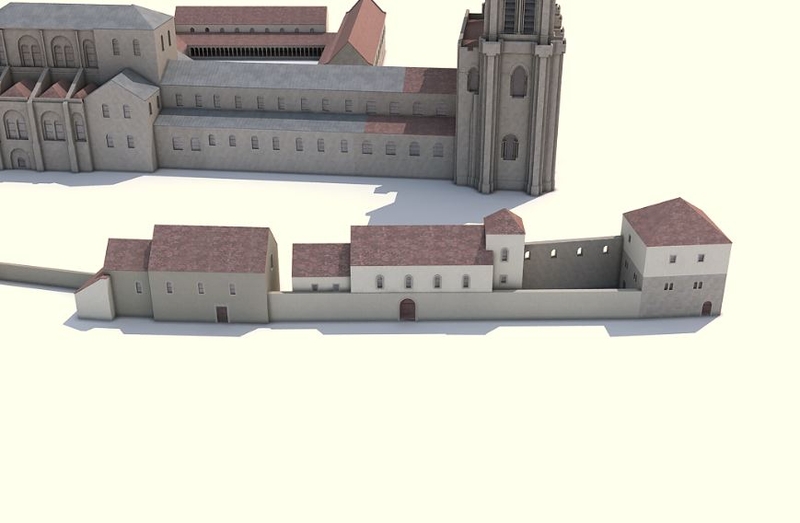 Reconstructed view of the Romanesque cloister and the guest house.

Restitution the churches of Saint-Paul and of Saint-Pierre.

Reconstructed view of the Saint-Barthélemy and Saint-Michel-du-Degré churches, and the two-storey building.

The two churches discovered at the northern edge of the main cemetery remained in use. The choir of the Saint-Barthélemy church was given an eastern annex. The church of Saint-Pierre was rebuilt from the foundations up, but without changing the layout. To the south, the apse was flanked by a tower. When we compare a plan that predates the demolition of the Saint-Paul collegiate church with François Debret survey of the cleared-off vestiges in 1842-43, as well as with more recent observations carried out on smaller surface areas, we may conclude that the church was reconstructed along the lines of a basilica. The nave, with its two rows of drum piers, was eight bays long and was directly connected to a choir that ended in a hemicycle. A square bell tower was located in the final bay of the southern side aisle, and was flanked to the east by a circular turret staircase built partially into the construction.

The morphology of of the residential area was also altered by the accelerated pace of new construction. An initial building, with faced walls, is aligned with a standing section of the wall of the former palace. The most basic hypothesis allows us to reconstruct it as a roughly square house with at least one floor. An imposing perimeter wall abutted the northeast corner of the house, and connected in a straight line with the Saint-Barthélemy church 48 meters to the east. There is a break in the middle of this wall that probably corresponded to a gate. To the east, the wall delimited a funerary zone. To the west, in combination with the wall section from the former palace, it created an oblong courtyard whose small eastern end was closed off by an isolated tower. Later, a fourth church was built, dedicated to Saint-Michel-du-Degré. Its rectangular apse-which a passageway separated from the gable of the Saint-Barthélemy church-was connected to a single nave that abutted the cemetery's boundary wall. The western façade of the church appears to appropriate the isolated tower. Although the building was buttressed, a simple roof probably provided cover.