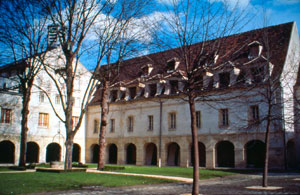 The Carmelites in the Garden by Guillot, circa 1770.

Since 1981, the former Carmelite nunnery has been the site of the Art and History Museum. It is the most eloquent architectural witness to the five convents that were established in Saint-Denis in the 17th century.
The convent's first stone was laid in 1628 by Marie de Medicis. The various buildings, arranged around a square courtyard, are only two stories high and are topped by an attic lit by dormer windows. On the ground floor, the chapter room, the refectory and the other common rooms are arranged around the cloister galleries that are incorporated into the building. On the upper floor are the sickrooms and the dormitory, whose cells are served by a corridor. Connected to the convent is a large garden with oratories and religious statuary; it consists of flower borders, rows of ornamental trees, a vegetable garden and an orchard.

The Carmel became famous for one of its members: Louise de France (1770-1787), daughter of Louis XV, who was first a simple nun, then a mother superior. On her instigation, the establishment was given a new chapel, designed by Richard Mique, architect to the king. Louis XV often visited his daughter, and a private house for him was built onto the convent's southeast corner.

After the French Revolution, the Carmelites were disbanded. The building was turned into a barracks, and the garden, which had become the property of the nation, was rented out. It was acquired by Descemet, the Parisian nurseryman. In 1803, his catalogue listed 52 varieties of apple tree, 58 of plum trees and 115 of pear trees.