For any traveller stopping over in Paris as a "tourist", a visit to the Saint-Denis basilica1 was a must.

Indeed, ever since the Holy Roman Emperor Charles IV stopped at Saint-Denis in 1378 in order to view relics and gems from the treasury, the town became increasing popular among art lovers. In the collections of the university library at Utrecht, there is an account of the travels of Arnold Van Buchel, a Dutch lawyer who visited Saint-Denis in 1585. The manuscript includes several drawings that were done on the spot.

At the time, the treasury of the abbey contained more than four hundred pieces, including church ornaments (altars, retables, monumental crosses, reliquaries, etc.) and items necessary for celebrating mass (clothing, chalices, gold plate, etc.). The abbey have also insafe-keeping the regalia, items for the consecration of the kings of France, such as crowns, scepters, "main de Justice" (hands of justice).

For the most part, these objects were kept in cabinets on the upper floor of the treasury, which adjoined the south side of the church. "In exchange for a small recompense to the guardian," Van Buchel was permitted to see the head-reliquary of Saint Benedict; Saint Denis' writing case; a tooth of Saint John the Evangelist held in a reliquary statue donated by Queen Jeanne d'Évreux in 1339; the hand of Saint Thomas and a finger of Saint Bartholomew, both displayed in monstrances; a griffin's claw and the Elephant, the most remarkable piece in "Charlemagne's chess set" ; and finally, one of the jugs from the marriage feast at Cana in which Christ changed water to wine. Whale bones were on display in the church, and the crypt held a narwhal tusk that was thought to have come from a unicorn. 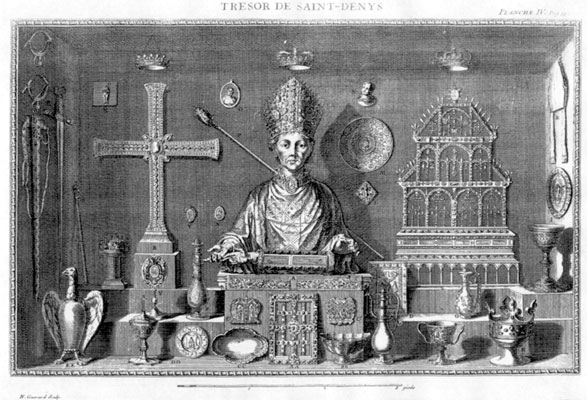 Plate from the History by Dom Michel Félibien depicting one of the treasury's cabinets, by N. Guerard, 1706.

In the cloister, Van Buchel sketched the famous lavabo that consisted of a circular pool, a basin supported by colonnettes, and a fountain ornamented with small figures. The monolithic basin, nearly four meters in diameter, survives in the basilica's lapidary collection. 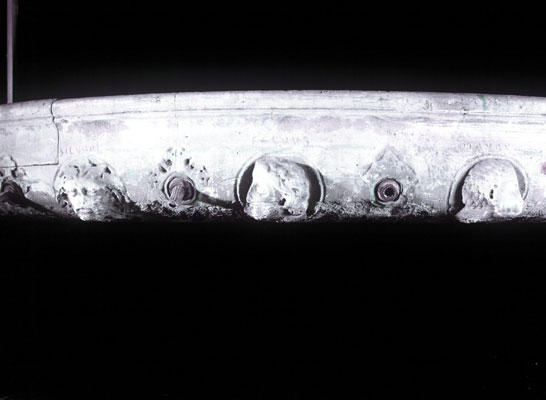 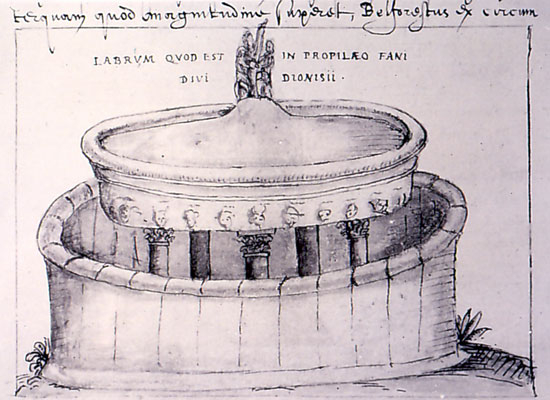 Detail of the stone basin, kept in the basilica's lapidary collection, circa 1200.