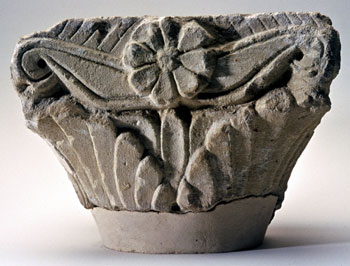 The four faces of this capital are decorated with a crown of acanthus leaves. The leaves are carved beneath each of the four angles and worked out in flat relief. They are applied to the capital's "basket", which is covered with thin, slightly concave strips. The volutes are topped with a curved abacus decorated with oblique grooves. An eight-petaled floret adorns the central section.

Around 800, this capital was re-used in the foundations of the Carolingian palace, the construction of which meant that the funerary galleries of the monumental complex had to partially dismantled. We may imagine that this capital, plucked from the rubble, was originally part of the gallery, which was built in the seventh century.