Open house at the dig

When significant archaeological excavations take place in Saint-Denis, open house days and guided tours are organized to allow the public to discover the initial results at the site itself. As far as possible, sites under excavation remain visible by the public. Information sheets, panels and even "news flashes" at fixed times are used to keep the population in touch with the main points of current research. 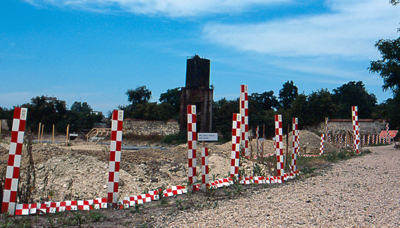 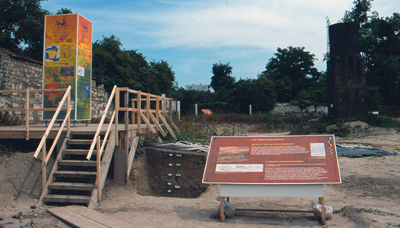 A rural establishment from the first century CE was found at the northern border of Saint-Denis, across from the Allende housing estate and a few steps away from the Saint-Denis Université metro station and the university it serves. It was located in one of the few market garden areas left in Saint-Denis. In the year 2000, it served as the basis for an original public outreach program. The symbol of the program was the surveyor's rod, used for sighting and finding locations, and a slogan-"One rod = 1 year, 2,000 rods = 2,000 years"-was used to create a path for the public to travel back in time through two millennia. Visitors started at the Space and Time Gate, represented by two totems, walked along a path set with rods, passed a third totem symbolizing Gallic civilization, viewed the work site from a belvedere, and were met at the end by archaeologists who helped them discover the site being excavated.

This was a scientific, cultural and social adventure, as well as a serious project for educating the public about the ancient history of their neighborhood. It was also the occasion to establish a number of partnerships, particularly with local associations concerned with prevention and social integration. The operation was a beneficiary of the "Grant to Projects for the Year 2000" from the Ile-de-France Regional Council, and received support from the State, the Ministry of Infrastructure (AFTRP) and the île-de-France DRAC Service.

The European Heritage days are a special time in which the public can share in the year's discoveries, the results of ongoing studies and see newly restored objects. Since 2004, the Fête de Saint-Denis, which takes place around October 9, has become another such time of meeting the general public. Using experimental archaeology and demonstrations of ancient know-how, an "artisans' village" brings to life techniques for manufacturing objects and creating decoration observed on archaeological objects.

This is not just an exercise in backward-looking, but moments that bring together knowledge from yesterday and from today, artisans from everywhere, well-informed residents, or simply those who want to learn more. 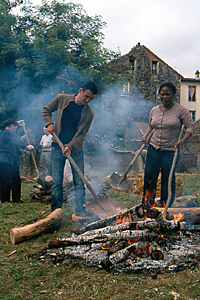 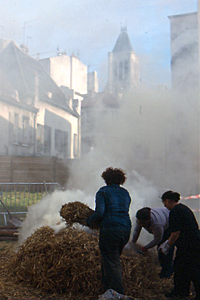