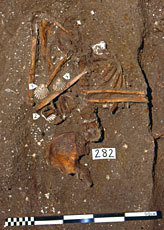 The Saint-Marcel church is mentioned for the first time in the ninth century in a Miracle by Saint Denis, which tells the circumstances surrounding the burial of the count Bertrandus in the church, located outside of the monastery. Archaeology has confirmed the existence of this church by excavating graves from this period.

The oldest tombs, organized in more or less regular rows, were laid in narrow pits. Later, the burial zone was reduced and surrounded by a ditch, which led to an increased density of graves. In line with religious practices that became standard from the Carolingian era, the dead were buried without funerary objects. The only exception to this rule is the late twelfth or early thirteenth century grave of a pilgrim that contained three scallop shells, which were used to designate pilgrimages.

The church, which was destroyed during the French Revolution, was described as being "the most beautiful of the parish churches of the town of Saint-Denis". It appears to have been built in the thirteenth century. An inscription in Gothic lettering in the northern side aisle tells us that "the dedication [of this portion of the structure] was made in 1451". In 1982, archaeological excavations were carried out on this side aisle extension to the church, revealing the existence of an ossuary. Skulls and long bones, sorted according to size, were arranged in plaster wall niches.

Entrance to the Saint-Marcel church, after a watercolour from the early 19th century.

Saint-Marcel church on the Belleforest map, 1575.