Originally, the Lendit was a religious festival that was officially "announced", hence its name - "Endit" is derived from the Latin indictum, from the verb indicere (to proclam), thus giving "Lendit" or "Landy".

It owed its start to the opening of the reliquary of Saint Denis on June 9, 1053, which coincided with the public display of relics of the Passion (one of the nails, and part of the crown of thorns). Special indulgences were granted those who visited the basilica1 on this occasion. The religious event grew in scope, drawing merchants to meet the needs of the many pilgrims.

Starting in the early twelfth century, trading activities were moved to the La Plaine, halfway between Paris and Saint-Denis; the fair began on the second Wednesday in June and lasted until June 23, the eve of the feast of Saint John the Baptist. Each year, the fairground stalls were set up according to a plan that resembled a housing estate. The abbey supplied, at the expense of the stallholders, the materials required for building the stalls, including planks of wood, poles, tarpaulins and canvas. There was also a leather market, which was set up in the Lendit barn. 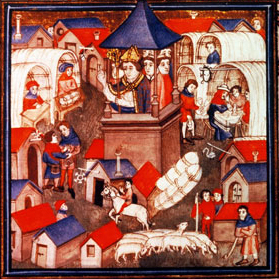 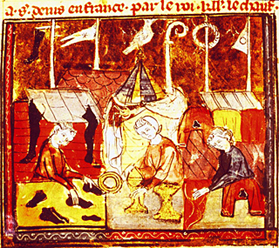 Miniature representing the benediction of the Lendit fair, in a pontifical from the mid-15th century.

Miniature representing the stalls of the Lendit fair, in the Grands Chroniques de France from the late 15th century.

The opening of the fair was traditionally announced by the Bishop of Paris, who blessed the merchants from the top of the Tournelle, a small edifice erected in the center of the fairground. On the day of the benediction, the University of Paris arrived in a procession to purchase parchment, which it had a preemptive right to buy. The Dit du Lendit rimé, a poem from the first half of the fourteenth century, lists nearly eighty towns from which merchants came. These were mostly towns in northern France that specialized in cloth production. The Lendit fair was also an important market for horses and livestock. Sheep were imported for local wool-making activities.

In 1426, the Hundred Years' War caused the Lendit to be interrupted for eighteen years. In 1556, Henry II moved the fair to safety within the town's walls.