In 1998, when the Pierre-de-Montreuil garden was being laid out north of the basilica, a remarkable discovery was made in a foundation: the mullions that were originally part the two rose windows of the Gothic transept, and that François Debret replaced in 1838 with copies that are still in place.

Discovery of rose window parts in the foundation of a 19th century wall.

Drawing of the restoration work on the north rose window by François Debret in 1839.

These mullions, carved in a Parisian limestone selected for its qualities, testify to the great skill of the medieval builders. Stone-cutters first trimmed down the pieces to their maximum width. Then, using templates for drawing the outline of the mullions seen in cross-section, they squared off the center section and carved grooves to hold the stained glass.

The prepared mullions would then be assembled in situ, a dozen meters up, held in place by iron pins sealed in lead. Chisels and gouges were then used to sculpt them. The capitals of these mullions are decorated with foliage, in styles that varied between a pure, graphic approach and a nearly realistic naturalism. Some of the bases were adorned with diamond tips and twisted cable motifs. A yellow ochre wash has been applied to the interior surfaces, while the outside surfaces show the effect of six centuries of atmospheric erosion. 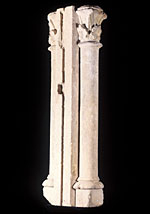 Template traced on the joint face of a mullion, with pin hole in center.

Mullion from the north rose window, circa 1240.