From the industrial town to the town of today 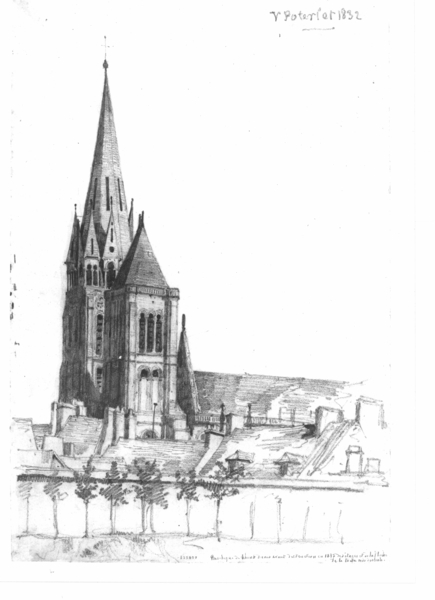 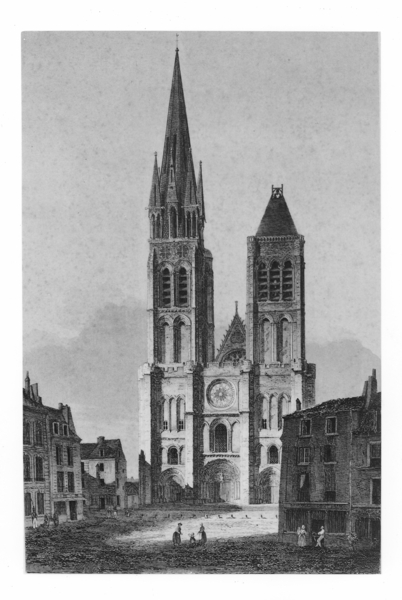 Grave view of the western facade around 1820.

The effects of the French Revolution

During the Revolution, every ecclesiastical establishment in Saint-Denis closed its doors, and in 1793 the town was renamed Franciade. In October of the same year, the bodies of the kings of France buried in the basilica were exhumed, and the bones thrown into two common graves dug in the cemetery north of the church. In 1806, Napoleon I decided to house the Maison d'éducation de la Légion d'honneur in the disused buildings of the monastery. Wishing to build the Tomb of the Emperors in the former abbey-church, he established an imperial chapter, onsisting of bishops, who were entrusted with reestablishing the liturgy. Four architects, including François Debret (1813-1846) and Eugène Viollet-le-Duc (1846-1879) were successively charged with restoring the building. During these works, the church lost its north tower, which was topped by an 86-meter-high spire.

The parish churches, which were confiscated during the Revolution as communal property, were purchased by individuals who put them to various uses, including as workshops, theatres and demolition sites. When religious freedom was reestablished in 1795, only the Carmelite chapel was still standing, and until 1895 it was used as a parish church. The old urban cemeteries were also abandoned in favour of a new burial ground at the Saint-Rémy gate that was inaugurated in 1806.

The beginnings of industrialization

Just after the Revolution, the town still had a rural appearance, as testified to by the prosperity of the mills on the Croult and Rouillon rivers that ground flour for the Parisian market. However, the opening of the Saint-Denis canal in 1842 and the arrival of the railway in 1844 provided the plateau of La Plaine with an infrastructure that would play a determining role in its industrialization. In addition, the region was of interest because it lay just beyond Paris toll-barriers -within which taxes had to be paid on goods-which had one of the highest tax rates in France. Between 1836 and 1845, three forts were built in order to include Saint-Denis in Paris's system of defense. Starting in the 1850s, an initial series of large chemical plants was constructed within the communal limits, a trend which accelerated with the arrival of metallurgy plants around 1870.

By 1861, Saint-Denis had over 22,000 inhabitants, and the town began to undergo profound changes. New roads were built in order to encourage the division of the land formerly occupied by the convents. Other large-scale projects took place beyond the boulevards that replaced the old city wall. In 1864, Viollet-le-Duc drew up plans for a new parish church, to be built facing the basilica1, and about a hundred meters from the old Saint-Paul-de-l'Estrée church. The first planned town neighborhood arose in the vicinity of this new church, beyond the boundary of the medieval town, adjoining the municipal slaughterhouses that were built at the same time.

In 1870, the town launched a major program to construct school complexes and infant schools. In 1881, it inaugurated a hospital, and two years later it built a new town hall, whose neo-Renaissance façade rivaled that of the basilica. In the 1840s, the fair stalls were replaced by four metal hangers. In 1893, these hangers were moved into a covered market that was built on the site of the former leather manufactury.