The funerary monument of a wealthy couple 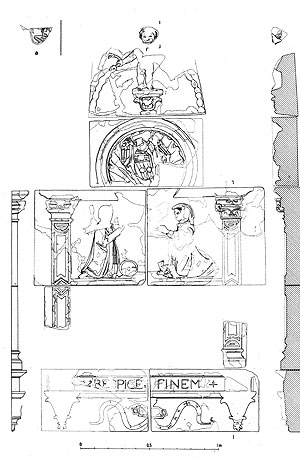 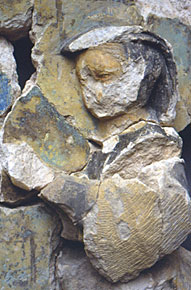 Proposed reconstruction of the tomb.

Detail of the woman praying, in painted limestone.

Around 1600, this funerary monument for a wealthy couple from Saint-Denis was reused as building material in the foundations of the Trois-Patrons church. Unfortunately, it has come down to us minus its epitaph, which would have allowed us to identify the figures. A fragment, buried beneath the rubble of the Saint-Geneviève church, leads us to believe that the tomb originally adorned the walls of this earlier structure, which was demolished to make room for the Trois-Patrons church.

The three-meter-tall monument consisted of a series of sculpted panels, depicting two facing figures at prayer, beneath a scene of the archangel Michael slaying the dragon. The man, clad in a coat open at the front, has removed his hat and placed it on the ground. The woman wears a dress and a fur coat, and has a curtain hooded bonnet on her head. A chaplet hangs from her belt, and a small animal turns its head to look at her. The rich framework includes an entablature bearing the phrase RESPICE FINEM, or "Look to the end". At the top is a putto holding beaded bands.

All of the surfaces sculpted in relief were painted. The painter's palette included shades of yellow, reddish-brown, orange, blue, black and white. The capitals were gilded. The style of this tomb allows us to date it approximately 1520, and to identify it as a work of the early Renaissance.