Crafts in the first millennium 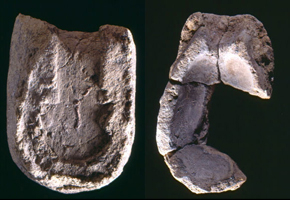 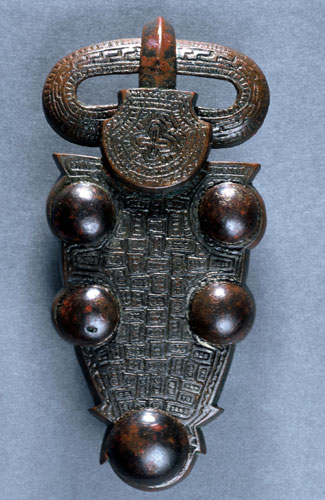 Diagram of how a belt buckle tongue was produced in series.

Fragment of a clay mold used to create the tongue and loop of a belt buckle, late 6th-early 7th century.

Bronze belt buckle with wicker-work decoration, from a grave in the necropolis outside the basilica, first third of the 7th century.

A workshop area nearly thirty meters long was discovered at the edge of the necropolis. It contained half-sunken hearths, ash pits and large amounts of copper alloy smelting slag. In the center of the workshop area, a sunken-floored hut was reused as a waste area. Its fill contained scraps from cleaned-out furnaces and fragments of terra-cotta moulds, thus testifying to the use of lost-wax casting.

The artisan would create a prototype out of wood or metal (A), which would then be used to make a bivalve mold (B), into which wax was poured to obtain several examples (C) that were easy to decorate (D). Each example was then wrapped in clay (E) and heated. The heat caused the wax to melt (F), but the imprint of the decorated object was left in the clay, which would then be filled with molten bronze (G). Once the metal cooled, the artisan would break the mold and remove the finished piece (H).

The workshop produced belt buckles that were characteristic of the late sixth and early seventh centuries, several examples of which were found in graves in the necropolis.