The appearance of the flat tile in the Ile-de-France region appears to have been closely connected with the adoption of steeper roofs during the Middle Ages. At Saint-Denis, the oldest examples of this were found in an archaeological context from the late twelfth century. The tile is nearly 2 cm thick, and is 31 cm long by 19 cm wide. It had a system for holding the tile in place, which included a hook, handmade by the tile-maker, and a hole for fitting either an iron nail or a wooden peg. 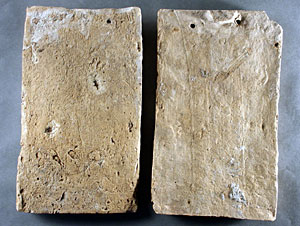 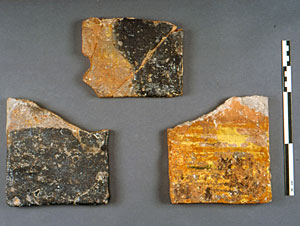 Archaeological layers from the 13th century reveal fragments of glazed tiles. Normally, only the apron-the exposed section of tile-was glazed. A yellow or green glaze was used, but brown and olive green tones have also been observed. Two-tone tiles have also been found, each with an engraved line separating the two shades. These tiles constitute parts of a puzzle that the roofers would assemble on the roof in order to form large patterns of varying complexity.

Use of these polychrome tiles was no doubt reserved for the roofs of the churches in the monumental complex and buildings within the monastery. Thus, during accounting year 1284-85, 47 pounds were spent on the purchase of "red tiles with lead varnish" (Pro tegulis rubeis et plombatis, XLVII lb.), for the domus, i.e. the monastery buildings.