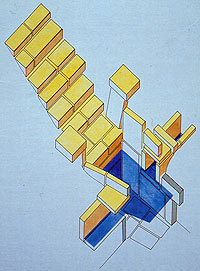 Excavation of the aqueduct upstream from the first tank.

The monumental complex was supplied with running water by three tanks that were fed by an aqueduct. The conduit that carried the water was placed at the bottom of a trench that was more than two metres deep and covered with horizontal slabs. In all, 240 metres of the conduit have been found. With an average gradient of 4.3 metres per kilometre, the aqueduct appears to have drawn water from a spring located about 700 meters to the west of the abbey, near the Saint-Remi church.

The three tanks are quite similar; like the aqueduct, they were created with slabs set on edge and pointed with a mortar made from tile fragments. A 1.4-metre-wide stairway led down to the edge of each tank, approximately 1.8 metres below ground level. The slight difference in elevation between the level of the water inlet and the overflow outlet indicates that the surface of the water was thirty centimeters below the rim. Thus the tanks, which vary in depth between sixty centimeters and 1.2 metres, had capacities that ranged from 1,300 to 1,500 litres. The construction of the aqueduct required the transport of nearly 10,000 stone slabs. When the system was in use, the base of the outlet was raised, creating a reverse gradient that quickly caused the system to silt up.