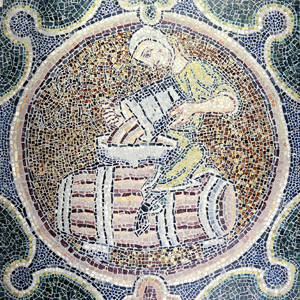 The wine grower, representing the month of October, on the calendar of the basilica's Saint-Firmin chapel; 12th century.

Starting in the 7th century, the Merovingian kings established an autumn fair that began on October 9, the anniversary of the martyred Saint Denis and date of an annual pilgrimage to his tomb. Under the Carolingians, saxons and Frisian merchants, who came to sell wool and woolen cloth, and to buy wine and honey, attended this fair. Two deniers from Dorestad and from Quentovic, as well as a sceat, all discovered during excavations, may be related to this fair. Starting in 845, Viking raids no doubt disturbed trade relations; nevertheless, as of the eleventh century, the monks of Saint-Denis revived the fair, which contributed to the abbey's wealth.

Originally, the Saint Denis fair was a long, seven-week affair, lasting from October 9th to November 29th, Saint Andrew's day. Since it was held well after the harvest and during grape-picking, it allowed the abbey to sell its grains and surplus wine produced by its extensive vineyards. The fair was held at the Place Panetière and in covered markets, but also in the abbey's main cemetery, where "setting up in the graveyard" cost two deniers for a stall.