The medieval town and its crafts

The many tool marks visible on building stones can tell us about the techniques used by medieval stonecutters.

Builders generally used Lutetian limestone (from Lutetia, the Roman name for Paris), a local limestone of marine origin-as shown by the fossils it contains, and which are visible to the naked eye. In construction, different quality stones were used for different purposes. Thus, the particularly resistant "bancs francs" were used for freestones. The finer-grained "liais" was much sought-after for sculpture, and was also used for paving stones, tombstones and one-pieces columns set perpendicular to their orientation in the quarry.

Soft limestone was carved with cutting tools such as shears and hatchets. Starting in the twelfth century, a harder limestone was used that required more high-performance tools such as the toothed hammer and the gradine chisel, two tools with toothed cutting edges.

Masons were responsible for assembling the stones. We can distinguish four distinct parts to a column: the base, the shaft, the capital and the impost. The base is generally decorated with moulding and claws (griffes) at the corners. The shaft may consist of a one-piece cylinder or several drums. The capital is the element chosen by the sculptor for decoration. The impost, which receives the end of the arch, may also be decorated with mouldings. 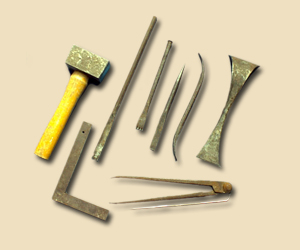 Tool marks made by the stonecutter and sculptor on a capital from the rose window in the north transept, circa 1240.