Crafts in the first millennium

Window maintenance in the year 1000 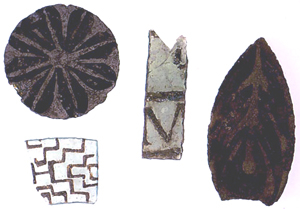 Stone moulds and window leads, including one that is untrimmed.

This activity is confirmed by the discovery of a group of three moulds for making window leads. The bivalve moulds are made of limestone; inside each, a flat surface displays twin grooves for casting lead strips for windows.

Lead fragments, both trimmed and untrimmed, were found with the moulds, as well as pieces of stained glass. One of these pieces, cut into a round shape and painted in grisaille with a veined, eight-petal rosette, no doubt was used in a decorative border. This is one of the oldest elements among the nearly 2,000 stained glass fragments discovered at Saint-Denis. One is tempted to establish a link between this discovery and the 101 windows mentioned in the description of the Carolingian basilica written in 799.