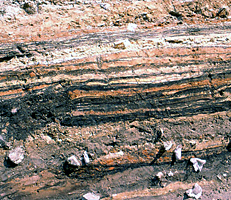 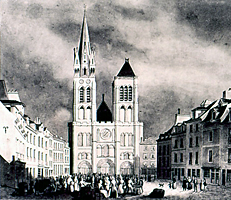 Cross-section of excavation of houses in the Rue de la Boulangerie. The red and black strata (reddened earth and charcoal) indicate the presence of medieval bakers' ovens.

The Rue de la Boulangerie (Baker Street) probably got its name from the many bakers who set up shop there in the Middle Ages. Their activity has left archaeological traces in the form of shop floors covered with cleaned-out waste from the baking ovens.

The Livre vert de Saint-Denis from 1411 regulated the ways in which bread could be made and sold. The bakers in Saint-Denis plied their trade with the permission of the abbey's Grand Baker.

Although they owned their own ovens, they were dependant on the abbey's mills for their flour. Bread, which was for the inhabitants and the taverns of Saint-Denis, could be sold in houses, shops or "from the window". The Master Baker, accompanied by his officer, would make surprise visits to bakeries in order to inspect the quality of the bread. 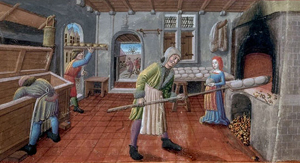 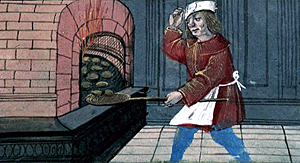 A baker at work, from a 15th century Franciscain Missel.

A baker in front of his oven. From a 15th-16th century Book of Hours, attributed to Jean Bourdichon

The Livre vert makes a distinction between bread baked in Saint-Denis and that produced outside the town. Bread not from Saint-Denis could only be sold in two places: on Fridays and Sundays on the Panetière square, in front of the basilica1, and at "Le Pain de Paris" in the Saint-Marcel neighbourhood on the other days. On the Panetière square, these "outside" bakers had bread stalls, the smallest of which measured barely fifty centimeters square. This "market" bread was only for domestic use and could not be resold. It was also stipulated that any bread that remained unsold before Vespers could not remain in the town overnight, and it was forbidden to try to sell it the next day. Offenders could be fined or have their bread confiscated by the Grand Baker. 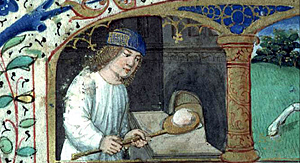 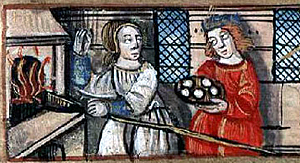 A baker in front of his oven. From a 15th-16th century Book of Hours

Husband and wife bakers in front of their oven. From a Book of Hours at Châlon, by Guillaume II Leroy, early 16th century.