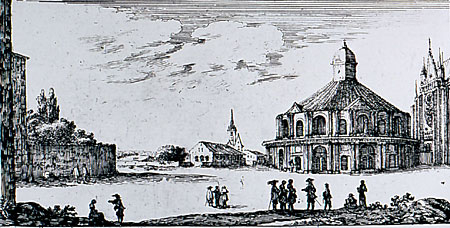 The Valois mausoleum by J. Marot, circa 1655; the third level topped by a dome, which was never built, is depicted here.

View of the Valois mausoleum by Israël Silvestre, circa 1652.

The Valois mausoleum is-along with the Tuileries Palace in Paris-one of the major works by the queen-mother Catherine de Medicis (1559-1589). The monument was built within the confines of the abbey cemetery, and was intended to house the tombs of the Valois dynasty. Thus, it can be considered as an extension of the "necropolis of the kings". It was attached to the north side of the abbey-church, and its single entrance was located in the Notre-Dame-la-Blanche chapel in the north wing of the transept.

The inspiration for the structure, commonly called Notre-Dame-de-la-Rotonde, came from the circular Roman temples of Italy. It measured thirty metres in diameter, and only the first two levels were completed-the dome was never built. In 1546, the structure was left incomplete. Inside, the rotunda includes six radiating chapels, each with its own axial altar. In the crypt, six other alterless chapels were destined to hold coffins.
In the centre of the rotunda was the temple-shaped tomb of Henry II and Catherine de Medicis. It was created by Germain Pilon and Ponce Jacquio, after a commission by Francesco Primaticcio, a renowned painter and sculptor who was appointed Superintendant of the King's Buildings.

In 1719, the rotunda, which had fallen into ruin, had to be demolished. Only the monumental tomb was preserved and moved to the northern wing of the transept.