Suger was probably born into a local family that, in the eleventh century, was very closely connected with the abbots of Saint-Denis. It is even possible that he was the illegitimate son of abbot Yves I who was officially accused of simony and who was assassinated around 1094.

In 1091, at the age of ten, Suger was "given" to the monastery. He spent ten years at Saint-Denis-de-l'Estrée, the abbey school, where one of his classmates was the future king Louis VI. As provost of the Berneval priory in Normandy, he took part in the reorganization of monastic lands. At Toury en Beauce, he benefited from the king's help in removing the abbey's assets from the plundering hands of Hugues du Puiset. 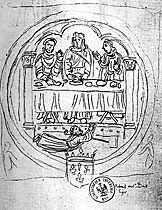 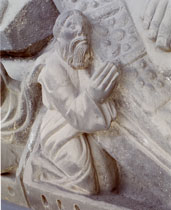 Detail from the door of the basilica's central portal. Suger is shown kneeling before the pilgrims of Emmaus. Drawing by Roger de Gaignières (1642-1715).

Suger at the feet of Christ, on the tympanum of the central portal, 1140.

In 1122, he was elected abbot of Saint-Denis. In response to the criticisms of the Cistercian Bernard de Clairvaux, he began by imposing strict observance of the Benedictine rule on the monks, and re-erected the wall that prohibited visitors from entering the cloister. At the same time, in return for the sum of 200 pounds, he freed the inhabitants of Saint-Denis and the village of Saint-Marcel from certain obligations connected with serfdom, in particular the practice of mortmain, a tax levied at the time of succession. Following this, he began work on the reconstruction of the monastery's buildings and the expansion of the abbey-church.

Suger was a very influential counselor to the kings Louis VI the Fat (1108-1137) and Louis VII the Younger (1137-1180), and even became regent of the kingdom in 1147. His Life of Louis VI the Fat launched the abbey's historiographical tradition, and he wrote two accounts that tell of his work as an administrator of the monastic lands and the consecration ceremonies for his church.