The modern town and its crafts 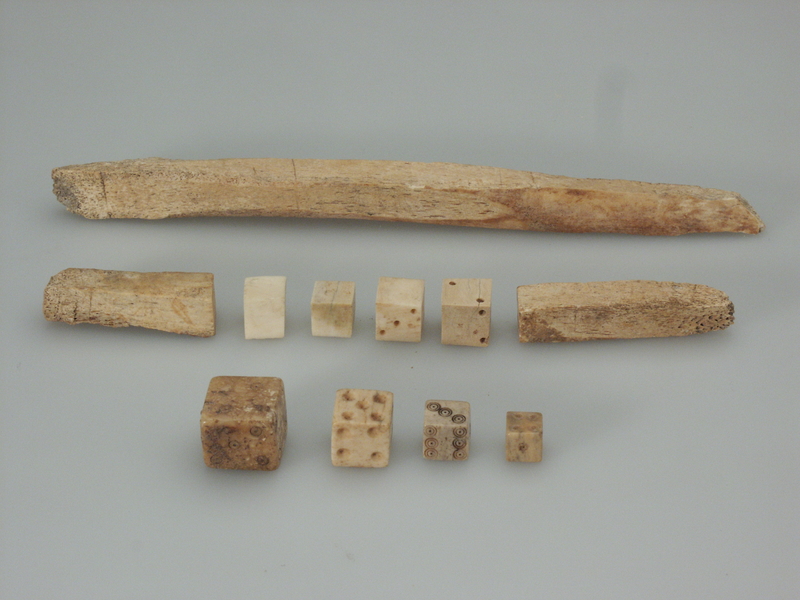 Bead-making workshop as illustrated in the Encyclopedia of Diderot and d'Alembert, 1762-1772.

Stages in the manufacture of dice, 16th-17th century.

Several waste pits for bead-making workshops have been discovered but only two were sufficiently well-preserved to allow archaeologists to study their production. The first contained 1,200 epiphyses from cow metapodes and thousands of pearls in various states of completion. These provide-two and a half centuries before Diderot and d'Alembert's Encyclopedia-a picture of the different stages of pearl manufacturing. First the epiphyses, were discarded. The bone was then cut up into sections, which were then sawn into small pieces. Each piece was perforated lengthwise and then mounted on a lathe so that it could be given the desired shape. The workshop produced long, round and oval pearls, and also sculpted elephant ivory, perhaps to be used in luxury goods. The waste pit also contained a number of domestic objects, often of good quality, which allow us to date the abandonment of the structure to the first half of the 16th century.

The contents of the second waste pit, which can be dated to the 16th to 17th century, are quite similar to the first, with the difference that, of the more than 2,200 bones examined, 73% were from cows, and 12% from horses-the vast majority consisting of metapodes.

These workshops produced quantities of pearls, many of which were used in making rosaries. As the levels dating to the sixteenth century attest, they also made buttons and dice. The dice are small, with a "classic" numbering system (each pair of opposite sides adding up to seven).