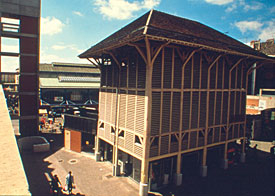 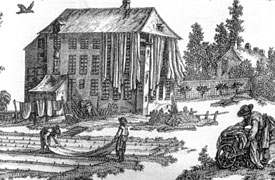 In 1772, Rodolphe Ebinger, a former employee of Oberkampf-the renowned creator of the printed textiles known as toiles de Jouy-opened a manufactory on the banks of the Croult. The creation of printed fabrics, with its operations of washing, preparation, printing and drying, requires abundant amounts of water and spacious premises. During the French Revolution, Ebinger acquired a garden adjoining the former leather manufactury and built a drying shed, which became known as the "Maison des Arbalétriers" (House of the Rafters).

This building, which was restored in 1985, is all that remains of Ebinger's factory. The timber-framed structure comprises a single room that is nearly ten meters high. Ventilation was provided by louvers installed between the framing and a the over-hanging roof. One of the corner posts originally served as the core of a circular staircase that gave access to a vast attic. This upper space had a floor and a gangway, and acted as a sort of grid from which the textiles-more than seventeen meters in length-could be hung. The building appears to have taken its name from its rafters, which are visible due to the large overhang of the roof. In 1805, the Ebinger manufactory employed 500 workers, who produced 22,000 printed fabric pieces a year.