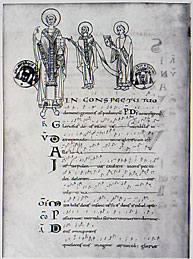 Saints Denis, Rusticus and Eleutherius, after an early 11th century gradual from Saint-Denis.

Two sources recount the life of Denis, the bishop who converted the Parisians to Christianity and who was persecuted and beheaded by the Romans. The first account places him in the first century CE and states that his tomb is located at Catulliacus, the future Saint-Denis. It specifies that around 475, Genevieve, the patron saint of Paris, had a basilica1 built over his grave. The second source, attributed to Gregory of Tours, states that Denis was one of seven missionary bishop charged with converting Gaul. The author places the martyr's death around the time of the emperor Decius (249-251). 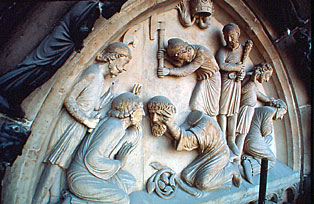 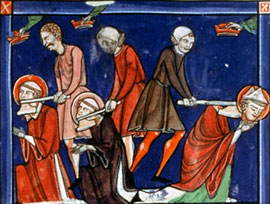 Decapitation of the three saints Denis, Rusticus and Eleutherius, from the tympanum of the basilica's northern door, circa 1170.

The legend of Saint Denis

These short and contradictory pieces of information have led to a legend whose goal was to increase the saint's prestige by placing him closer to the roots of Christianity. Around 600, a martyrology lists for the first time Denis' two companions, the priest Eleutherius and the deacon Rusticus. Around the same date, the first of the Lives identify Denis-the first bishop of Paris - with Dionysius the Areopagite, who was converted by the apostle Paul on the Areopagus hill in Athens, and who is mentioned in the Acts of the Apostles. Denis was sent to Paris by pope Clement I, where he built the first church. The emperor, worried by the many conversions that were taking place, ordered them to be persecuted. Denis, Rusticus and Eleutherius were arrested, extensively tortured and finally beheaded on the "Mont de Mercure"-the place that is now Montmartre. But, so the legend goes, Denis picked up his head and, guided by two angels, walked to a place where the pious woman Catulla buried him and his two companions in a field.