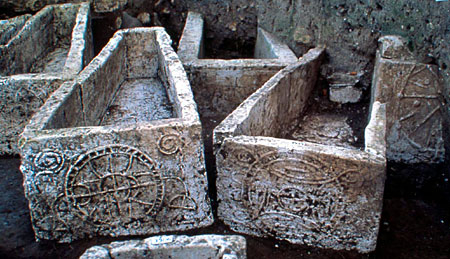 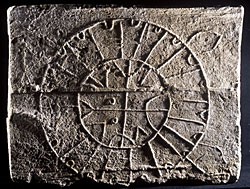 The creation of sarcophagi in plaster allowed Merovingian artisans to develop a distinct funerary art form. Pouring the plaster into formwork made of reusable wooden planks, they created a method to produce one-piece sarcophagi in large numbers. Certain moulds may have been used to create several dozens coffins.

Ornamentation engraved in the wooden molds resulted in relief decoration. These were usually found on the outside of the panels at the head and foot of the sarcophagus; decoration of the long sides and of the inner faces is rare. The engravings took inspiration from an ornamental repertoire which we may assume came from popular art. The most commonly used geometric motifs include wheels, rosettes, secant circles and stars. In addition, within these decorative zones, Christian symbols such as the cross, the chi-rho and facing birds were used purely for their ornamental value. Some of these compositions, however, appear to have been inspired by monumental decoration, and in particular ornamentation of the chancels and the balustrades.