In addition to the rather unusual eating habits of our Neolithic diners, which do not always inspire emulation, we are still uncertain about their use of sweetenings and salt.

Besides the small fruits collected at the edge of the forest, honey was certainly used, because analysis of adhesives and pottery material shows traces of beeswax. Thus, in the 32nd century BCE, porous pottery containers were systematically sealed with beeswax, which was applied right after firing, when the pots were still hot.

Since, there was no definite proof of salt production during the Neolithic period in western Europe, it is hardly imaginable that anything other than wood ash or water from salty springs was used to salt food. There are many such springs in the Jura, and recent research has demonstrated that starting in 4,200 BCE salt was produced by evaporating salt water on bonfires. After burning the wood-by a technique that was still in use in the Gallic era-the abundant salt crusts can be eaten without risk. This technique produces astonishing quantities of salt, and we can imagine that large quantities were used to preserve meat and to trade with neighboring settlements.

At Salins (Jura), carbon-14 dating shows that bulk of salt production began in the 30th century BCE. Our desire for salt hasn't lessened since. 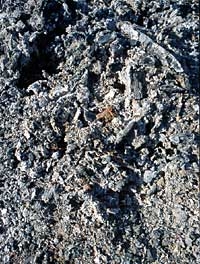 Sprinkling salt water on a bonfire.